Spotlight onAmy Deardon and a giveaway 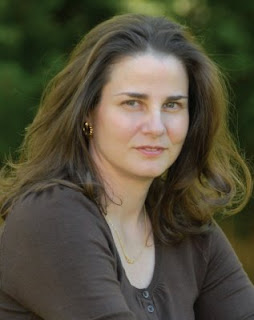 AMY DEARDON----Welcome to Write by Faith. I understand your novel was picked to be read by the ACFW Bookclub. That is quite an honor! I can't wait for the discussion. I know it will be very interesting. I also wanted to mention that Amy has agreed to give away a copy of her book A Lever Long Enough.

Rules for giveaway: You must leave an email to be contacted if you win. If I can't contact you then you will have to buy the book! And answer the daily question: Where do you go to relax?
Extra entries:
-Refer a friend and have them leave your name in their comment +1 for both of you
-Become a follower :) +2 (yes you automatically get two extra points for already being a follower)
-Post about this +3 let me know what you did in separate comments :)
Now let's get to know Amy. Amy, please tell us a little about yourself :

I’m married and fortunate enough to be able to stay at home with our two children, now 15 and 12. In my life B.C. (before children) I did bench science research and taught anatomy and physiology at an undergraduate level.

I undertook a personal quest to investigate the claims of Jesus’ resurrection with the goal of destroying them. To do this I studied biblical and extra-biblical accounts of Jesus and numerous commentaries by believers and skeptics alike, listed the facts agreed upon, and began to explore scenarios that could explain what was known. To my surprise and considerable dismay, the evidence kept pointing away from naturalistic explanations and eventually formed a virtually certain case for the resurrection of Jesus. Finally I admitted defeat and became a Christian.

Can you tell us a little about A lever Long Enough? 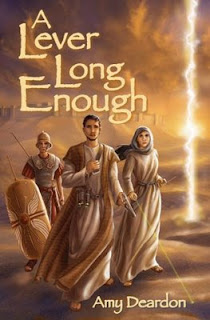 In the near future, the Israeli military has developed a prototypic time machine. When believers in Yeshua (Jesus) create a politically explosive situation that threatens the balance of peace between Israel and nearby countries, the Israelis must send a team of four elite soldiers back to film the theft of Jesus’ body from the tomb and thus disprove Christianity.
The team, consisting of a Special Forces soldier as leader (Benjamin), an ex-American astronaut as engineering specialist (Sara), an archaeologist, and a linguist, has exactly seventy-two hours to collect the video evidence. Drawn into a web of first century deception and death, the only way to escape is for the team to change the past. In the present, a traitor, Gideon, attempts to sabotage the mission and seize control of the military complex. Benjamin is the only one who can reveal him, but he is trapped two thousand years away. Even with a time machine, time is running out…

Let’s pretend money is not a factor, if you could go anywhere is the world where would you go?

The space station. This counts as part of the world, doesn’t it? Have not had that answer before!

What is your favorite children’s book?

I read The Chronicles of Narnia starting when I was about twelve, and reread them so many times I lost count. My favorites are A Horse and His Boy and The Last Battle, but really they are ALL amazing. Those are all great reads!

I love old black and white movies and the old musicals. What is your all time favorite movie?

I know what you mean. There are some greats, likeThe Ten Commandments with Charlton Heston and Yul Brynner, and Gone with the Wind with Vivien Leigh and Clark Gable (that shockingly my kids’ generation knows nothing about – please tell me I’m not that old!)Isn't it a shame those great movies are only found on TCM.

My favorite set of movies, though, is Peter Jackson’s Lord of the Rings (The Fellowship of the Ring, The Two Towers, The Return of the King) based on Tolkien’s amazing book series by the same name. What WAS it about that Inklings group???

These movies link Tolkien’s dense stories into a few well-drawn narratives that deliver an intertwined and powerful message. The actors are well-cast, the special effects are amazing, and the attention to detail is stunning. If I can write books half as well as Jackson has done this series, I will have done better than I ever dreamed.

What would you like your readers to say about your writing?

I hope they say that my writing is exciting and also makes them think. Lever, and the other novels that I plan, are the complex kinds of stories full of action, romance, and exotic background and ideas that are my favorite things to read.
I want my writing to appeal to non-Christians as well as Christians. I want to get past a skeptic’s religious preconceptions so that he might be open to considering Christ.

What are your dreams of 2009? What do you hope to accomplish this year?
2008 was busy getting Lever ready for publication, but in this new year I’m looking forward to returning to writing as my main focus. I have two half-finished projects that I’m eager to complete manuscripts for in 2009 – an ambitious yet hopefully do-able goal, if I’m very organized.
The first project is my prequel, entitled Nest Among the Stars from Obadiah 1:4, that follows Sara’s space station disaster. This one is really shock and awe, with a deep theme of forgiveness. The second project is nonfiction, entitled The Story Template, that is a practical guide for a writer to develop a resonant, complete, compelling story from vague ideas. It’s based on an algorithm I’ve developed during my story studies, and it really works with students I’ve coached. It’s not a formula, more like a description of proportions and guidelines that work with any genre, since I’m a great believer in the uniqueness of each artist’s vision. You can see a tutorial for preliminary story organization that I’ve put on my website under *resources.*

What do you enjoy doing when you are not slaving over the computer creating another wonderful novel?
Well, I love to spend time with my family. Our kids aren’t going to be home for too much longer, so I’m trying to enjoy every minute.

What is your favorite verse from the Bible?
There are so many! One that is reassuring when I doubt my abilities is Paul’s statement, Philipians 4:13: I can do all things through Christ who strengthens me.

What do you want your readers to take away from your novel?
That the historical life of Jesus is worth further investigation. I started writing fiction because the circumstances surrounding Jesus’ death blew my mind, and I wanted to convey the meticulous yet ultimately compelling evidence for the resurrection.

Donna, thank you again for letting me visit with your readers! I can be contacted through my website at http://www.amydeardon.com/. I also have a blog at http://amydeardon.blogspot.com/. My book is available on amazon at http://www.amazon.com/Lever-Long-Enough-Amy-Deardon/dp/0981899722/ref=pd_bbs_sr_1?ie=UTF8&s=books&qid=1232836890&sr=8-1 .
Autographed copies of my book can be ordered through my publisher at http://www.taegais.com/.
Posted by Donna

Hi Donna,
I am a follower!
Thanks,
Darby
darbyscloset at yahoo dot com

Donna,
My favorite place to relax is on my lounge chair, in the sun with a book! In the winter thou, I enjoy going to the gym and riding a bike while reading.....reading away!
Thanks so much for this offer, I love the books you pick to host on your site!!
Thanks,
Darby
darbyscloset at yahoo dot com

My favorite pace to relax is in my hammock in the corner of my backyard by the campfire pit. NY email address is grumpydan@netzero.com

I'd love to read this.

I'd love to read this. I already follow. My favorite place to relax is in bed with my cozy stuffed bear and a great book. Or by the fireplace in the winter.

This book looks like a very interesting read. Please put me in the drawing.

I'm thinking the best place I go to relax is anywhere that I can be holding or propping a book and reading while relaxing. My favorite place is in bed, snug and warm but most times it is on the couch in the living room where my glass of water is close by, also located close to the wood heat stove that keeps our house warm in winter.
Thanks for the chance to have my name in the drawing, what a book to discuss in the ACFW! I'm looking forward to the book and the discussion.
Pam Williams
cepjwms at wb4me dot com

By the pool with a book, preferably in Summer so i can take a swim when it gets too hot :)

I usally love if I can go take a bath with a book to relax, but most often in the corner of my couch with just a lamp on and a cozy blanket with a ggod book!
I am a also a follower already!
martha(at)lclink(dot)com

When I am stressed I can drive a half hour into the Big Horn Mountains and when I am by the still mountain lakes, or bubbling creek or just hiking, I feel sooooooooooooo close to God. I appreciate the beauty that only he could create.

I would love this book.

Thank-you so much for the contest.

I really find this book so interesting.

The place that is most relaxing for me, is either in my big antique bed, or on the couch, where I've made a little nest for myself

I am a follower.

Please enter me in the contest.

I would love to win an autographed copy of this book. My favorite thing to do is reading.
Lorraine
moml1@cox.net

My favorite place to relax is probably at the bridge a half mile from my house. Just sitting on the supports and scaring the rare driver. Unfortunately it's just too cold in January!

Anyway, Lever sounds like a great book and I'd love to be entered in the drawing. Thanks!

My favorite place to relax is on the beaches of Maui, but barring that it is to cuddle up in bed with a good book.